Need a reason to use hand sanitizers? 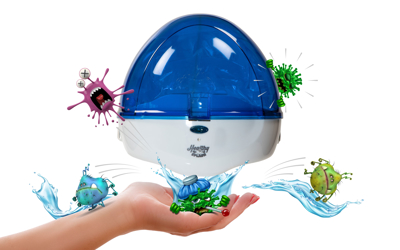 Need a reason to use hand sanitizers? Here are the top five most dangerous illnesses caused by germs

Almost every year there is a new germ that causes a stir. Germs are widespread, they are unavoidable and sadly when they invade a person they have the power to cause devastating damage. Germs can be fought off using antibiotics and hand sanitizers, but there are those highly dangerous germs that put up an immense fight, waging war inside your body, before they are broken down and defeated. There are four types of germs: bacteria, viruses, fungi, and protozoa.

Not everyone wins the battle with a germ, and with antibiotic resistant germs becoming a scary part of our reality, it is more important than ever before to make sure that you are as protected as possible from getting sick. Using hand sanitizers regularly is a good place to start, but that can only protect you so far. As the news about the Zika Virus takes hold of the world, you might be thinking about how you can protect yourself from all sorts of other illnesses and infections. The first thing that you need to know in order to protect yourself is to know what you need protection from. The spread of germs is something that everyone should know about, and everyone should know about these deadly viruses which are caused by germs.

There is no cure for the rabies virus. Sadly almost everyone who gets rabies will eventually succumb to the illness. Rabies can take hold of certain animals including dogs, monkeys, rats, bats and raccoons, where the virus incubates for a number of months. The virus is passed onto humans when the infected animal bites the human. If this deadly bite is treated early, and the patient gets the required seven, but very expensive injections, the patient will probably not be infected. It is difficult to tell whether or not an animal has rabies as most times the only way to tell is by killing the animal and examining the brain. This is something that is most of the time impossible and highly unlikely to be done. The survival rate for those infected with rabies is almost zero. Once a patient shows the first neurological symptoms of the germ, the infection will be fatal. Other symptoms in humans includes irritability, confusion, abnormal postures, strange thoughts and hallucinations. A hand sanitizer is not going to prevent infection, but getting those injections once you are bitten by an animal you don’t know could save your life.

A germ that is considered to be almost non-existent thanks to vaccinations that are available in almost every country in the world. But back in the 1500’s measles was so deadly that it was responsible for destroying two-thirds of the Cuban population. It is believed that measles has killed 200 million people around the globe, since it was first recorded. The germ that causes all of the damage that measles has the power of doing, spreads to the respiratory system where it launches its attack. It starts with a sore throat, runny nose, red eyes and a cough before it leads to a nasty rash. This exceptionally contagious and potentially fatal virus is then spread through coughing and sneezing. Not everyone gets vaccinated, so the virus still hangs around. Measles in babies and measles in children can be very harmful, and a vaccination is about the only way to prevent infection.

Warning: if you have a delicious meal in front of you, skip this section.

Although this is a common virus, often affecting children and infants, if left untreated the rotavirus can be deadly. This virus causes intense vomiting and diarrhoea in those who get it and can lead to dehydration and death if not correctly treated. This virus is transferred into the body through faeces ingested by the patient. The virus is treatable and children can recover quickly with the right medication, however each year around 450 000 children will die from it, which is why it is given a spot on this deadly list.

If you are of a certain age you will probably remember reading about the scary anthrax attacks that happened in the USA in 2001. A week after the World Trade Centre was destroyed in the biggest terror attack in the nation’s history, the country was again under siege. Letters containing anthrax spores were mailed to politicians and members of the media, resulting in the deaths of 5 people. Anthrax enters the body through the eyes, nose, and open cuts. The spores then attack the respiratory system which leads to death. Mortality rates have dropped to 45% of all cases, which is still quite a large number. Anthrax also has the ability to cause boil like sores on the skin which then turn into a black eschar, which is basically an ulcer with a black centre. If this is not treated, the tissue eventually breaks down and the germs enter the body, attacking vital organs.

2015 will be remembered for many events, the most widely reported being the deadly Ebola outbreak in North and Central Africa. From December 2013 to January 2016, 11 315 people had succumbed to this haemorrhagic fever and the virus had appeared in Europe and North America for the first time in infected travellers. This virus is known to attack from the grave as well, with those burying the dead getting the virus themselves. It can take 2 days to 3 weeks for the infection to present symptoms and from there the virus kills quickly. Patients can survive the infection with the right treatment, however in the last outbreak, even with treatment, nearly half of those infected died. The virus is spread though bodily fluids, including the fluids from bush animals. Bush meat has been one of the biggest culprits in the spread of Ebola. Even after recovery, a person can spread the virus through unprotected sexual contact or through breastfeeding. During an Ebola outbreak hand sanitizers can become a crucial defence against contracting the infection, as a mere handshake could mean life or death.

Hand sanitizers can kill almost all of the world’s most deadly germs, unless they are contracted through the air. While you will never be completely safe from the worlds harmful germs, by using hand sanitizers or by consistently washing your hands, you can avoid illness.